Our Self-Reliant Group members in East Leeds came together to learn, share and inspire one another at Trust Leeds’ SRG Gathering 2022!

The themes of the day were networking, digital and communication – and members discussed the importance of using online platforms to communicate with one another during lockdown. Using the ‘Top Tips for Mental Health’ video made by our SRG members as a reflective tool, we discussed the importance of maintaining different forms of social networking as a way to combat loneliness, to keep in contact with our fellow SRG members and how to do that in a safe and secure manner.

Be Your Own Boss SRG member Maresia then shared her experiences of being Deaf, her business (Flutterby BSL), and what inspires her about the SRG movement. It was a pleasure learning how to sign SRG-related words in British Sign Language, such as ‘sharing’ and ‘connection’ from such a brilliant teacher – so a big shoutout goes to Maresia for her kind and inspiring words!

Glitter Fairies and Be Your Own Boss SRG member Sarah taught our members how to make balloon flowers and shared her own experiences of being in an SRG, alongside setting up a fabulous photo booth for members to have a photo taken by our very own SNAP SRG. SRG members Geraldine and Iram set up henna tattoo and hand massage ‘stations’ which all attendees thoroughly enjoyed, and we also heard from Sarah [of the Grow Together Girls SRG] about how being in an SRG gave her the confidence to become a founding volunteer of the Clothing Rebellion clothes exchange shop.

We are so lucky to be in the company of such a creative, welcoming, and inspirational group of people! A big thank you to Gemma and Kentmere Community Centre (especially Rachael and Mel) for a delicious lunch and a welcoming atmosphere – and most of all, a massive thank-you to everyone who came along yesterday – you are all brilliant… 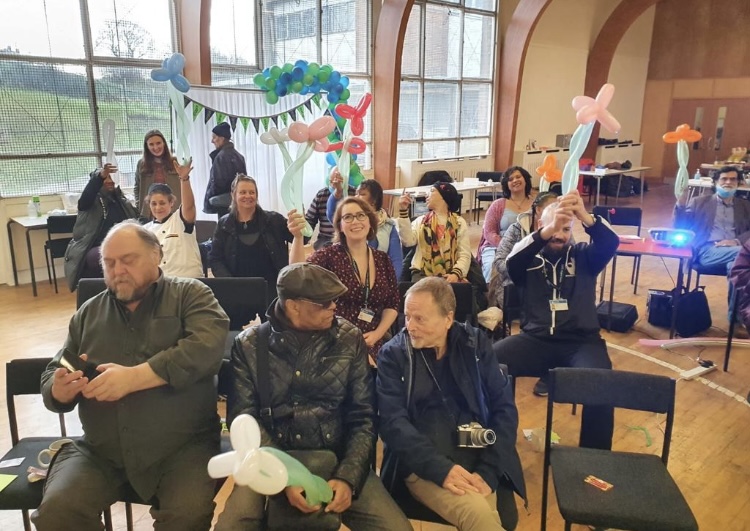